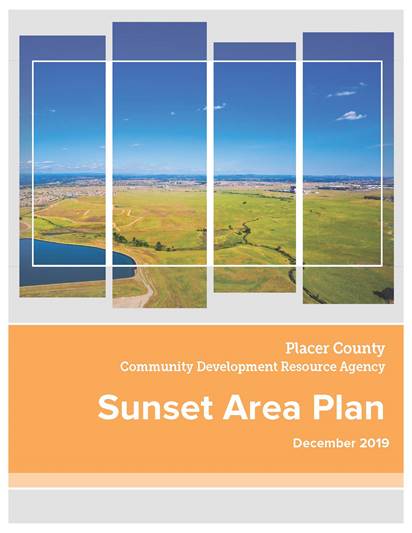 On December 10, 2019, the Placer County Board of Supervisors unanimously approved an updated Area Plan for the Sunset Area in west Placer County. The Sunset Area Plan area covers 13.9 square miles in unincorporated Placer County between the cities of Rocklin, Roseville, and Lincoln. The Area Plan outlines a comprehensive development plan to achieve the County’s long-term vision to promote the Sunset Area as a prosperous and thriving regional center with opportunities for high-paying employment, high-quality entertainment, and access to higher education  for area residents. The Area Plan includes a policy comprised of nine chapters: Land Use and Economic Development; Transportation and Mobility; Public Facilities and Service; Natural Resources; Cultural Resources; Noise; Health and Safety; Housing; and Implementation. The Area Plan is complemented by Implementing Zoning Regulations and Corridor Design Standards. These regulations, standards, and guidelines specify the details that will ensure that new development delivers on the vision of the Sunset Area Plan.

Click on the links below to view the Sunset Area Plan. 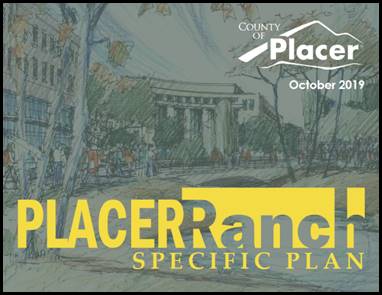 Click on the links below to view the Placer Ranch Specific Plan.

The objective of the SAP update is to re-envision and re-brand the SAP to take advantage of opportunities to create a unique employment, entertainment, and education center that would provide regional benefit and create primary wage-earner jobs for residents of nearby cities and unincorporated areas. The overall vision for the SAP and PRSP includes the following features:

The Sunset Area encompasses 8,497 acres located in unincorporated south Placer County west of the Highway 65 corridor, situated between the Cities of Lincoln to the north, Rocklin to the east, and Roseville to the south. The proposed PRSP area constitutes 2,213 acres within the southern portion of the SAP area.

The proposed SAP is a Placer County-initiated update to its 1997 Sunset Industrial Area Plan.  The PRSP is included as part of the proposed SAP.  This effort would update the existing community plan, general plan, maps, and regulations. The Sunset Area, which includes the PRSP project site, encompasses 8,358 acres located in unincorporated south Placer County. The County has prepared a DEIR for the project to satisfy the requirements of the California Environmental Quality Act (CEQA) (Public Resources Code [PRC] Section 21000 et seq.) and will serve as the lead agency for CEQA compliance.  The DEIR analyzes the overall SAP at a program level, and provide a more detailed project-level analysis for the PRSP.

The SAP will bring forward new land use designations, including:  General Commercial, Entertainment/Mixed Use; Business Park; Innovation Center; Eco-Industrial; Light Industrial; Public Facility; and Urban Reserve.  The 2,213-acre Placer Ranch Specific Plan (PRSP) is a mixed-use community proposed in the Sunset Area consisting of 5,636 residential units (units have been modified and reduced since release of the January 2018 Preliminary Public Review Draft PRSP) including a university, an age-restricted community; an elementary school, middle school, neighborhood parks and open space; and commercial and mixed uses, and campus park (office, research and development, light industrial, and commercial). The proposed university and non-residential land uses of the project are intended as a catalyst for employment-generating development in Placer County’s overall Sunset Area.

The Sunset Area, which includes the PRSO project site, encompasses 8,497 acres located in unincorporated southern Placer County. Southern Placer County is characterized by a mix of urban, suburban, and rural land uses and is influenced by the Sacramento metropolitan area. The Sunset Area covers 13.9 square miles between the cities of Rocklin to the east, Roseville to the south, Lincoln to the north, and unincorporated Placer County to the west. The area to the west is primarily farmland. Major landforms in the area include the Sierra Nevada to the east and Folsom Lake to the southeast. The Sunset Area is located west of State Route 65 which connects to Interstate 80 in the south and State Route 99 to the north. The Sunset Area is approximately 16 miles from downtown Sacramento.

This effort consists of updates to the existing Sunset Industrial Area (SIA) plan, the Placer County General Plan, maps, and regulations. As part of this process, the County is preparing a Draft Environmental Impact Report (EIR) to analyze potential environmental impacts from the project. A Notice of Preparation (PDF) for the EIR was posted on November 14, 2016. Preparation of the EIR is currently underway.

Sunset Area Plan Appendices, including the Corridor Design Standards and Guidelines, the Capital Improvement Plan, and the Infrastructure Finance Strategy, will be uploaded with the next Sunset Area Plan Public Draft documents.

Additionally, several studies and reports have been written to help inform proposed policy and the EIR, and are available for review: 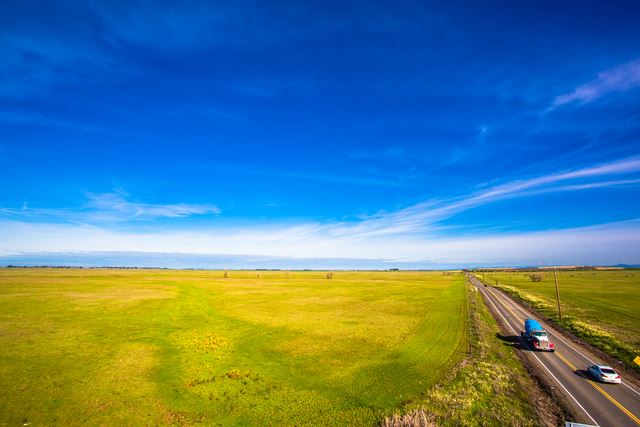