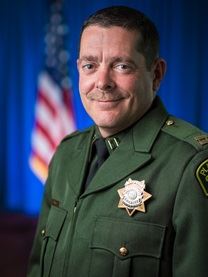 Captain Dennis Walsh was raised in Placer County and began his career as a reserve deputy in 1992 and was hired as a full time deputy in 1993. As a deputy, Dennis worked in the Corrections Division, and as a patrol deputy in the Granite Bay, Loomis, West Roseville and Lincoln/ Newcastle areas. As both a patrol and jail deputy, Dennis served as a training officer and was instrumental in shaping the futures of many current deputy sheriffs.

Dennis was promoted to sergeant in 2003 and served as a first-line supervisor both on patrol and in the Corrections Division. In 2006 Dennis was assigned to run the Crimes Against Persons unit, and spent the next four years supervising a team of detectives that worked many high-profile and unusual investigations.

As a lieutenant, Dennis was assigned to the Corrections Division at a time when the county was still building a new jail and just prior to the implementation of California’s realignment legislation. He became directly involved in the county’s focus group to develop the Community Correction’s Partnership Plan, and was instrumental in identifying strategic plans and data collection processes to better position the Sheriff’s Office to meeting this new challenge.

In 2013, the county approved a budget to open the South Placer Adult Correctional Facility. Dennis participated in the formation of a transition team whose assignment was to get the new jail operational by May 17, 2014. Staff opened the facility for operational training on May 17, and began moving inmates into the facility on May 31.

Dennis was promoted to the rank of captain in July, 2014, and was assigned as the commander for the North Lake Tahoe Station. He brings with him a commitment to providing quality service to the citizens of Placer County and the many visitors that choose Tahoe as their vacation destination.