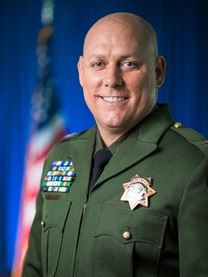 Captain Darrell Steinhauer began his career with the Placer County Sheriff’s Office in 1994. During that time he has worked a variety of assignments, including Corrections, Patrol, and Investigations. As a deputy, he worked both the Property Crimes and Special Investigations Units. Upon promotion to Sergeant in 2003, he worked Corrections and Patrol, where he served his final assignment as the Administrative Patrol Sergeant.

Darrell has been the lead program manager for several projects and programs within the agency. He was also a member of the agency’s Special Enforcement Team (SET) for 17 years, serving as a team member, assistant team leader, and finishing his tenure as the team commander. After promotion to Lieutenant in 2008, Darrell was assigned to the Placer County Superior Courts, where he assisted in the opening of the Santucci Justice Center in West Roseville. In 2012 he assumed the role of the South Placer Sub-Station Commander in Loomis. Darrell promoted to the rank of Captain in February 2017 and was assigned to Corrections in July 2017 to oversee the Auburn Jail.

Captain Steinhauer graduated from Colfax High School. He received his master’s degree in Criminal Justice Management from the University of Nevada Reno. He is also a graduate of the FBI National Academy in Quantico, Virginia (Session 241).

Darrell currently serves on the Board of Directors for the Placer Sheriff’s Activities League (PSAL) and is actively involved in youth sports and charitable programs. He strongly believes that engagement in extra-curricular activities, such as sports, are a positive deterrence from criminal activity.

Darrell is married and a father of two.