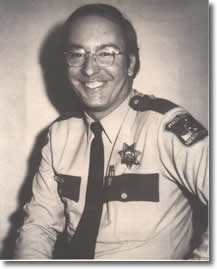 On July 13, 1978, Deputy James Machado was shot and killed with his own service weapon during a struggle with an escaped mental patient in Auburn. With the help of citizens who witnessed the shooting, officers from California Highway Patrol and an Auburn Police sergeant quickly located the suspect near Interstate 80 and Highway 49.

James had served the Sheriff’s Office for 4 years. He was survived by his wife, Nancy, and three young children; Jim, 7; Joy, 3; and Jeanne, 1.